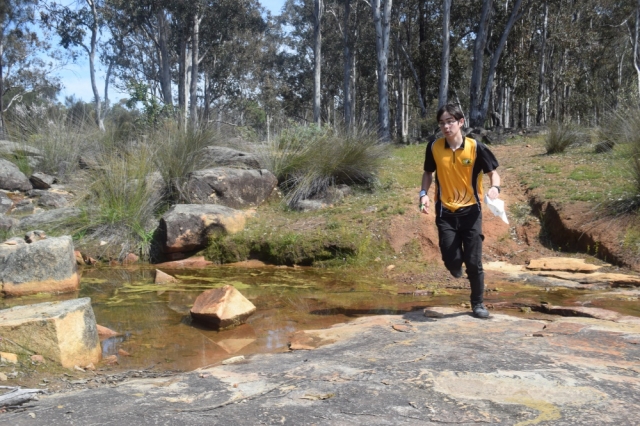 After the steep slopes and rigours of the Middle Distance event, the Long Distance Champs provided generally open Wandoo woodland with patches of rock and gully terrain. Some long legs and tricky rocks provided challenge, while runnability assisted the very fit and accurate.

The courses were set by David Kessell, based in Moora, and coming out of self-imposed ‘retirement’ from orienteering to assist LOST with the event.

The weather was fine, which was great for the event organizers but a bit too warm for runners and for the presentations, held in an open, sunny spot near the caravan.

Thanks to the many helpers, in particular Peter Gillon for caravan towing (again!) and for assisting with putting out water a few days before the event and caravan packing at the end. The computer crew of Cameron and Jane, supervised by Rosalie McCauley did their usual good work, particularly with managing pre-entries.  Control collection was undertaken by a large number of people: Mike Howe, Chas Lane, Anthea Feaver, Henry McNulty, Peter Gillon, Edward Plummer, Robert Graieg, Moreen and Alan Cox and David Kessell. Tony Simpkins also assisted with control collection and packing up. Thanks also to Dan Greig who organized printing and collection of the place getter certificates.  The cake and drink stall raised a good amount, thanks to the bakers and consumers.

Good luck to all those who have gone to SA for the Nationals!