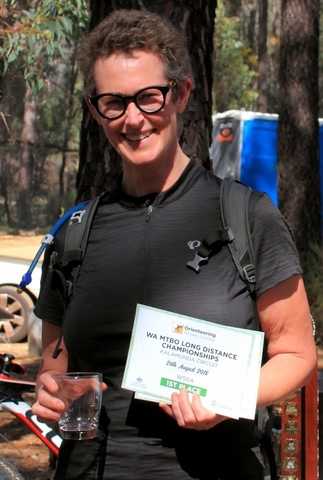 It was a stunning sunny late winter weekend in Perth and the Mountain Bike Orienteers enjoyed a double dose of riding with the MTBO Middle Distance and Long Distance Championships.

The Middle Distance event at Roleystone was on a compact map with many tracks and lots of route choice. The Long Distance event, with the assembly area at Farrell Grove near Mundaring Weir, took advantage of the well loved single track trails at Kalamunda Circuit.

Post event each day there was much discussion of route choices and riding experiences over some lovely baked treats and on Sunday a BBQ sausage sizzle lunch. Thanks to Richard Begley for being the BBQ chef!

Many thanks to the Setters, Edward Plummer (Middle Distance) and Richard Begley (Long Distance) for the time, thought and care that they put into their courses. Thanks also to Nicole Davis as organiser and manning registration.

Events happen with a band of helpful people playing their part. Thanks to those who; set up, packed up and brought along food to share. Toilet towing was handled by Ricky Thackray and Tash Sparg. Control collectors who headed back out on their bikes for more riding were: Duncan Sullivan, Richard Matthews, Anthea Feaver, Ricky Thackray, Robert Pullella, Sten Claessens and Vanessa Smith. Vanessa came just to collect controls and enjoy the hills! Thank you all for making the setters life easier. Even before the event Rosalie McCauley contributed with the pre-event OE setup and start lists.Thank you.

Congratulations to Ricky Thackray (M21) and Tash Sparg (W21) who both took out double titles.

That's it for MTBO for this year. Watch this space for new events starting late summer 2019.