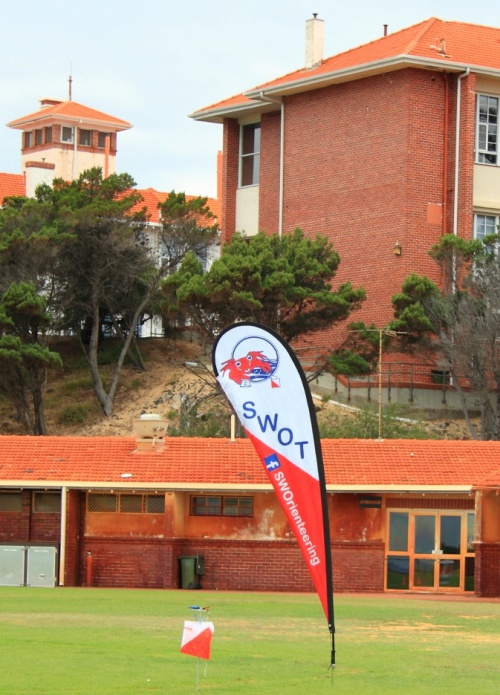 We were joined by 43 competitors for the NavDash at Bunbury SHS. Many had come from Perth, which was great – staying overnight and competing the next day for the bush event at Evedon. By far the most popular was the long course, 33 competitors. Many completed the medium course as a secondary challenge.The weather held (mostly) and stairs and slopes abounded, providing elevation to some grand views to the ocean…no doubt the students enjoy the view when they should be concentrating!!

Big thanks to our SWOT members who assisted with the set up and to the OWA members who helped out initially whilst we were problem solving the lockout at the venue. Luckily Don had a spare portable toilet on a trailer in his driveway… as you do… and friendly neighbours provided a much needed Genset to power up the event! Course setter Jill Elderfield was notably absent (couldn't make it from Africa for the event!!). The Phillips' stepped in and set and run the event on the day. Thanks to Paul Dowling who provided great assistance with guidance around results, Eventor and publishing using the lovely OE2010.

The Jenour area of Evedon was the setting for 2018's first bush event. It was attended by 61 people, including 13 newcomers with the long course (H3) being the most popular with 23 entrants. The weather was overcast and windy in exposed areas. The courses were set and controlled by Peter O’Loughlin. Orienteerers navigated around the steep granite terrain, with German elite, Bjarne Friedrichs showing everyone a clean pair of heals in the steep H3 course, winning by 15 minutes. A bit of confusion occurred for some competitors on the H4 course, when a set of earlier version control descriptions caused dismay at control 7, after much circling competitors realised the descriptions on the map were right and continued onto the control description they had been looking for, we apologise for any disappointment this caused.

Thanks go to Jo Maynard and Riley Martin, who check most control placements late Saturday afternoon and to SWOT members who assisted with the set-up. A special mention goes to Kayleen, Marlize, Robyn, Cliff, Don, Jaco, Jordan and Mal for control collection and pack-up.