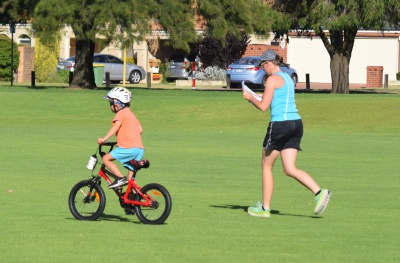 People were flying back into the Metro Series for 2018 at Ranford with Ricky’s kite shaped map. Just the thing to team with the afternoon sea breeze. Bike riders, large and small, also enjoyed the area along with a range of runners and family groups taking on the course.

Enjoying the newly mapped area participants enjoyed the lakes, patches of bushland and posh houses whilst running around looking for sandpits, green boxes and the odd earth wall to clamber over. Confusion reigned with stories of people running (or riding) past controls after not reading the descriptions (a necessity in a tRicky styled event!)

Many thanks go to all that helped including Tash, who set up and packed up the registration area, Lois, Sue, Jack, Simon, Russell & Richard for control collecting and finally Ricky for the new map and setting the course.