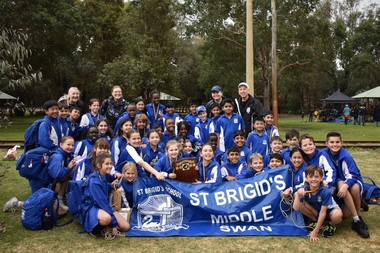 It was a dark and stormy night before the Primary School Championships on 17 August 2022. On the morning of the event, two schools decided not to attend because of the predicted severe weather. The event Organisers had an early morning consultation with BOM Perth and decided to continue with the event. Thankfully, apart from one deluge of rain during setup the rain held off until after the end of the event. Eighty-five students from 10 schools participated. Thirty-one volunteers from OAWA helped run the event and Sarah Stevenson from Whiteman Park worked with OWA to manage the event.

Feedback from the students and their teachers was very positive. Many students enjoyed running through the mud and happily compared mud stains on their clothing with their school mates after their run. Thanks to the support of Healthway and Woolworths all participating students received fruit, water, a participation certificate and a high bounce ball. Healthway also supported a best recipe competition which was won by Raymond from Christchurch Grammar School. The competed recipe book will be available from the OWA website in the next few weeks. 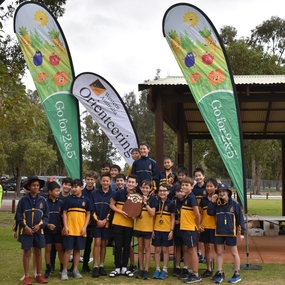 As with past schools championships, a large and wonderful team of current and past OWA members worked hard on the event. There are simply too many to list, but you know who you are and thank you for giving up your time to introduce orienteering to primary school students. Nick Dale prepared interesting courses for the students and invented running person – a running person made of vegetables and fruit that was printed on the maps to encourage all to get their 2 and 5 every day. Melinda Richards, Rosalie McCauley and Christine Howitt organised the event. Jan and Ian Fletcher provided valuable help and advice to Nick, Melinda, Rosalie and Christine.

Sincere thanks to Schools Sports WA for helping promote the event; teachers for their participation; Whiteman Park for allowing access to the map area and facilitating the event; and to OWA for sponsoring the event.