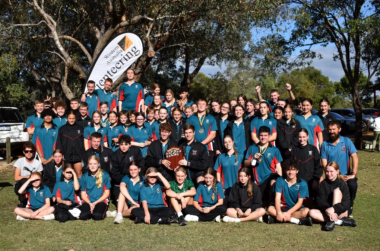 The Orienteering Association of Western Australia (OWA) held the 2022 Secondary Schools Orienteering Championships at Whiteman Park on Wednesday 15th June. The organising team and participants were happy that the forecast rain held off until after the event finished. Over 300 students from 15 schools participated. Thirty-six volunteers from OAWA helped run the event and Sarah Stevenson from Whiteman Park worked with OWA to manage the event.

Feedback from the students and their teachers was very positive. Most students completed their course which was an outstanding effort as for most the championship was their first attempt at bush orienteering. There was fierce competition in the individual classes as shown by the 57 second gap between the first three placegetters in the Girls 16A Class – Zali Dale first, Kate Braid second and Caitlin Madden third. Overall, Quinns Baptist College was the Champion School with 28 points, ahead of Ellenbrook Secondary College with 20 points, and Grace Christian School and Shenton College tied for third with 18 points each.

As with past schools championships, a large and wonderful team of current and past OWA members worked hard on the event. There are simply too many to list, but you know who you are and thank you for giving up your time to introduce orienteering to secondary school students. Nick Dale visited Whiteman Park more than 12 times to update the map and set the courses. Melinda Richards and Rosalie McCauley organised the event. Jan and Ian Fletcher provided valuable help and advice to Nick, Melinda and Rosalie.

Sincere thanks to Schools Sports WA for helping promote the event; teachers for their participation; Whiteman Park for allowing access to the map area and facilitating the event; and to OWA for sponsoring the event.

Results for individual students are on Eventor.
Check out each school's total scores.
Photos are on the OWA Facebook page.