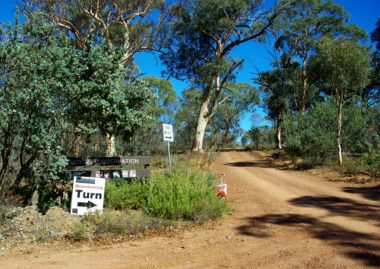 A wet preceding week softened the ground and delayed DBCA’s plans to burn the northern end of Mt Observation, which allowed 94 people the opportunity to explore one of our less frequented maps. Originally mapped in the early 1990s, and last used in 2013, the map has held up surprisingly well – some of it was burnt last year which kept the undergrowth in check, the rock mapping is still quite credible, and the trail bikers haven’t discovered it. DBCA have even put in a toilet, which saved us towing one out there.

The original plan was for quite a small-scale event, in the shadow of the Easter carnival, with just H2-H4 hard courses ranging from 2.9 to 6.6km plus the usual M/E/VE courses. The good detail at Mt Observation is limited to quite a small area, and the H2 was already doing two laps of it.

However after the initial taping session one of the Nomads asked if there could be a H1, please? This was duly cobbled together by adding a third loop to the H2, via a map exchange at the final control. Since the H2 already had a map-flip, this meant the H1 was spread across three maps! This was quite a complicated solution in theory, but the competitors seemed to take it in stride – except for one nameless runner who was presumably so excited by the map exchange he forgot to punch the control…

Thank you to the many people who helped make this event happen – in particular Jack & Sue Dowling for putting out and collecting controls, instructing and printing extra maps the night before! (the H1 was far more popular than expected!), Lois and Rob West for instruction and control collection, and Rob B, Hadrien, Liisa, Craig, Rachel, Liam and Karen for control collection. Finally, a big thank you to the setter, Paul Dowling.

Results are available on Eventor, and photos on Facebook.