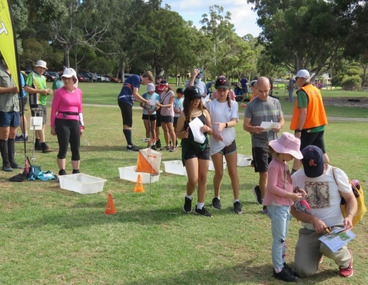 Manning Park presents some interesting options for the setter as it is not quite a bush event and bit more than a metro or sprint event. The flat area around the lake made for convenient courses for the E and VE and the abundant tracks on the hillsides and ridge made for choices for the harder courses. Control placement tended to be on the easier side of things on track junctions and other more distinct features. Courses where possible were designed to provide different route choices and challenges.

The morning turned out beautifully on a lovely fine day with blue skies. It also brought out much larger numbers than were expected with over 117 entrants/teams. It was pleasing to see a number of Manning Park trail runners entering and while they may not have understood IOF symbols they made up for it with local knowledge of the tracks. While extra maps had been printed to the longer Hard, it turned out that more Moderate/Medium and Easy maps were required and some hasty amendment to surplus VE maps were made for the additional entrants. Thanks to Rob and Lois West for assisting with the start and amending maps.

The VE course saw less entrants than expected but this was made up for the larger numbers on the E course. These both went around the lake on the open grassed areas. The M course went a similar opening section and then went up the hill along the tracks. The Hard courses wended their way from the south then west up and along the ridge to the north before coming back down. There were numerous tracks on offer but some stalwarts were not deterred by the green on the map and went straight line through the thick scrub. The up and down of the hills and rough quality of some of the tracks provided additional challenges. Finish times reflected the standard range and were in line with expectations.

Overall feedback on the event was positive with a number of the newcomers enquiring about future events and the local trail runners all appeared to have enjoyed the challenge. It was unfortunate that one of the controls on the long H course had its brick removed by persons unknown on Saturday afternoon which meant that early competitors to it were delayed and it needed to be replaced.

The weather was fine for the duration of the event and managed to stay clear until the last controls were just coming back after collection. These had been packed into the car and then the deluge started. The gods had been watching over us and smiled on our event.

Special thanks to Brian Austin for setting, Daisy McCauley for assistance in setting and placing controls and thanks for all those involved in assisting in the administration and control collecting - Anne Austin, Melinda Richards, Rosalie McCauley, Christine Howitt, Helen Post, Chip Lundstrom, Dan Greig, Liisa Hirvonen, Rob West, Lois West, Rachel West and others.

Results are available in Eventor and event photos are on the OWA Facebook page. Check out some competitor's routes (and upload your own) on Livelox. Thanks to everyone for participating and we look forward to seeing you soon in other events!