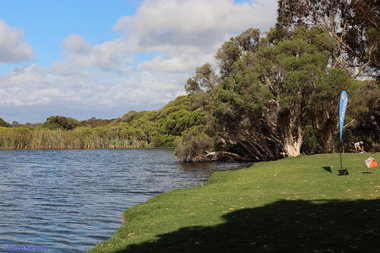 Almost 100 people, including a pleasing number of juniors amongst the first-timers and recent beginners, took part in the Herdsman Lake event in dry, cool conditions. The assembly area was the Herdsman Lake Discovery Centre, which provided coffee as well as pleasant surroundings. Feedback after the event was very positive (despite some frustrations with downloading SI data for people who entered at the event) with many commenting on the pleasant lakeside portions of the courses.

Controls were spread around the southern curve of the lake, giving competitors several ‘east, west or middle’ choices, with no deceptively tricky sections. Many of the usual frontrunners returned first. Amy Dufty was fastest female on the Short course and Rohan Braid pipped Archie Brownlie by a mere 2 seconds after they ran quite different routes. Kate Braid and Liam Dufty both won their division of the Medium course by about a minute. Ceri Pass finished the Long course in good time and Craig Dufty was the fastest male, followed by Mark Lommers who is quickly mastering the skills of orienteering and still hunting his first win.

A big thank you to Ian Fletcher who prepared the courses.

Results are in Eventor.Upload your route to Livelox and see what routes your fellow orienteers chose.Check out the MetrO Route Analysis for this event.