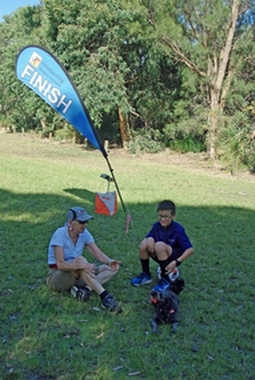 The Dianella Regional Open Space was first mapped by Bryan Hardy in the early 1980s, and was used for summer night orienteering events at that time. Later, it was used in the Be Active Schools program, including for inter-school competitions. Many changes to the area have been made by the City of Stirling in recent years, so a full update was required. The park is large enough to support a Short MetrO course which does not require road crossings.

The adjoining urban area includes parts of Dianella, Morley and Noranda and had never previously been mapped. It is quite interesting with several small parks, many laneways, and two schools, offering good route choice options for MetrO events.

Winners' routes, together with the setter's optimal routes for each course, have been added to the OWA Facebook page.

Thanks to WOW members for their assistance at the event, including Helen Post and Bob Boekelaar (meet and greet and beginner briefing), and Carol and Ken Brownlie, Ken Post, Ron Marcus, Graeme Harris, and Christine Howitt (control collecting). Also thanks to Jack Dowling, Ken & Helen Post, Rob Beattie and Sten Claessens for help with setup and packing up. Finally, a big thank you to Tony Simpkins for setting the event.

Results are in Eventor.Upload your route to Livelox and see what routes your fellow orienteers chose.Check out the MetrO Route Analysis for this event.