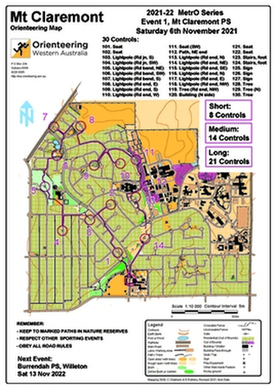 The MetrO season has been ushered in with beautiful weather greeting us at the first event, which was held in Mt Claremont. There was a good turnout of 84 entries, including a few teams to bring the number of people running to ~90. It was pleasing to see quite a few new faces, including a number of kids.

Route selection was difficult, primarily because the map was composed of three areas with very different street layouts: to the west was a grid pattern, to the north were broad curves with lots of cul-de-sacs, and to the east were a collection of tight, complex cul-de-sacs. On top of this the terrain was pretty lumpy, although the lumps didn’t really affect route selection as they were everywhere! The challenge that route selection posed was bourne out by the wide variety of routes that ended up being chosen, but with the shortest possible routes eluding all runners. The ideal Medium route is shown here.

Results from the event are in Eventor.