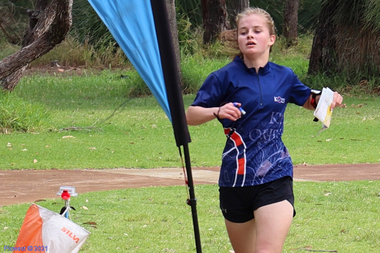 The winter orienteering season concluded with the Sprint Championships at Carine SHS, held over from mid-September due to the late revelation of conflicting bookings. Difficulties were compounded by the early start to building works in the southeast of the map, which meant that the setter, Nick Dale, had to revise parts of all courses three days before the event.

This was the first event at Carine SHS and the tight grouping of buildings combined with numerous narrow stairways and impassable walls led to complex courses with seemingly interminable changes of direction. Nick further increased the complexity by addition of several taped off pathways.

The detailed nature of the map led to winning times slightly longer than recommended in nearly all classes, but comments received indicated that the courses were well received. Unfortunately, one of the many external gates was not opened for early runners despite being shown as passable on the map, which meant that allowance had to be made for affected runners, leading to changes to the results of both the male and female open races.

Congratulations also to juniors Zali Dale and Kate Braid, who beat their older peers by over a minute on the same course, and Aldo Bosman, runner-up in the men's competition.

Thanks to Nick Dale for setting the courses, to Melinda Richards for acting as organiser and Dan Greig for controlling the event. Thanks are also due to WOW members involved in setting up; Ken Post for assisting at the Start; Sue Greig for monitoring a couple of external controls throughout the event; and control (and 24 cement block) collectors Rosalie and Daisy McCauley, Peter Komyshan, Graeme Harris, Tom, Vicky, Archie and Fraser Brownlie, Carol and Ken Brownlie and a very welcome temporary addition in Paul Dowling.

Results for all participants are in Eventor. Check out the photos on the OWA Facebook page.