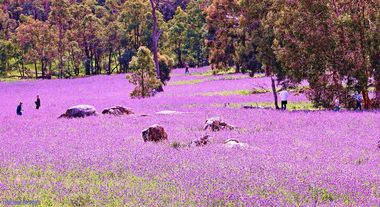 We were lucky with the weather - it rained heavily on the way to the event and then cleared. The courses, set by Jack and Paul, were complex. Competitors had to take care to tag the correct controls as there were nearly 50 controls in a compact area with many being on rock features. The Paterson's Curse was prolific - this made running harder and also concealed the many small rocks that tripped up a few orienteers. Despite these challenges, almost all competitors completed their courses. BO did have a clean sweep of the podium in the Open class, but the winning club is LOST by virtue of their extensive Masters teams. We hope LOST enjoys being custodians of the Rutty Rock trophy for the next 12 months.

Thanks are due to many people. First of all - our controller, Rachel West, and Team Dowling (Jack, Paul and Sue) who set and organised the event. Control collectors were Hadrien Devillepoix, Ellie Sansom, Simon Windsor, Phil Dufty, Andrea and Mason Eves, Rob Beattie, Matt Seward and Paul Dowling. Penny Dufty instructed. All BO members at the event helped with packing up. Melinda Richards provided IT support - not an easy job! Club convenors (or their stand-ins) put together the teams for their respective clubs. Rob West and Ellie Sansom took lots of photographs.

Relay results are in Eventor, as are the results for non-relay participants. Look out for photos on the OWA Facebook page.