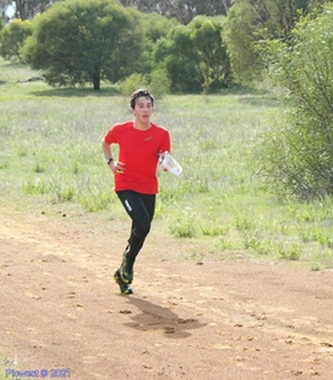 Frazzle was a BO Club event, set by Lois and Rob West, with Helen Bailey as controller. Held on farmland near Brookton, it was the SOL Long event. The area was mostly open farmland, interspersed with complex granite sections. There were plenty of sheep with the lambs just a few months old. The heavy rains produced some very high, wet capeweed in large parts of some paddocks and made running extremely difficult. The creeks and flat areas were waterlogged after the rainfall for the month of July, which was well above average. The high winds had also caused many trees to fall over along the access roads.

Many thanks to our intrepid control collectors who were faced with a severe gale just after setting out. Many had to shelter behind boulders for protection. The list of collectors were Jack and Sue Dowling, Simon Windsor and Russell Buchanan, Rob Beattie, Liisa Hirvonen, Liam and Craig Dufty, Rachel West, Andrea and Mason Eves and Hadrien Devillepoix. Thanks to Penny and Phil Dufty for helping pack up and Jack and Sue for picking up the signs. Special thanks to Rob Beattie and Helen Bailey, who tried to find a missing module that was dropped somewhere out on the map. Melinda did a great job administrating in the caravan.

ADHOC members, John and Edmund travelled all the way from the southern port, to compete. They camped the night along with Rob and Lois and made good use of the campfire. Moreen Cox, the Eves and Helen occupied the donga, which was kindly provided by landowners, Sam Burton.

The course winning times on the Hard courses were under the recommendations. So, the open farmland even with the wet windy conditions gave competitors the opportunity to cover the ground very fast. In hindsight some courses could have been longer, but given the weather, I am sure they appreciated a speedy return to shelter. On the H1, won by Craig, then for the minor placings Sten, Hadrien and Graham had a very close tussle being only seconds apart. On the H2, Aldo and Liam performed very well to take first and second places. The H3 had the juniors in another close encounter with Eckart taking first and siblings Isaac and Caitlin very close behind.

Results can be found in Eventor.