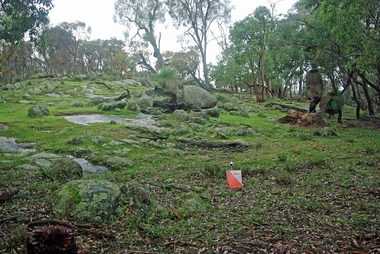 Gunapin is traditionally a lovely area to set or compete on and it did not disappoint. There were lots of favourable comments from competitors about the courses, which is always good for a setter and controller to hear, after putting lots of time, thought and effort into designing them. It was especially pleasing to note that only 5 people DNF’d or mispunched out of over 100 entries, and also that winning times on all but the E course were within the technical guidelines. Many people did a second course after their competition run, including Archie, Edmund and Rohan, who were tailed by John around a Moderate course after racing around their E first. The weather was fine on our set up days (Friday and Saturday) with only 3 brief showers on the Sunday, unlike in the city.

A big thank you goes to the setter, Helen Post, and the controller, Ken Post. Thanks also to control collectors: Archie, Fraser, Sarah, Rosalie, Tracey, Dave, Dan, Sue, Carol, Brian and Anne, plus Liisa from LOST. A special mention goes to Gary and Robert G for standing the signs up on Great Eastern Highway to save the organisers driving all the way back there from York. Thanks to Ken B, Tom and Vicki for dismantling the toilets.

Thanks to Ken B and Carol for carrying out their usual efficient organising role.
Special mention also to Brian from Elders in York for assisting us with some last minute extra printing, and to the landowners who allowed us to use their property.