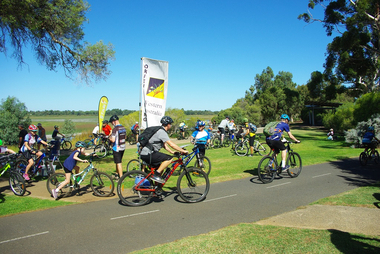 On the day before the predicted deluge associated with Cyclone Seroja, 39 people competed in the first MTBO of the year starting next to Bibra Lake and heading off into the surrounding suburbs on the hunt for 40 controls. The event was a score event and competitors had two hours to visit as many of the 40 controls as possible.

The course was set by Ben Coetzer and Brian and Anne Austen helped place the 40 controls on the morning of the event. Most of the controls were accessible by road or hybrid bikes with a few that required a mountain bike to access. Overall, competitors were very happy with the course and it was really pleasing to see a few family groups giving orienteering a go.

Three competitors managed to visit all 40 controls. Well done to Duncan Sullivan, Simon Windsor and Edward Plummer. Other competitors visited fewer controls and still had fun. Mike Howe commented that he was looking for his lemon slice and coffee after the first hour of riding. Rob Beattie was very happy he had his cycling helmet on as he was hit by an errant golf ball as he cycled past the chipping green. Ruben Claessens visited 31 controls – an outstanding effort for a youngster.

The event team at the assembly area were joined by a curious quenda as they waited for competitors to return.

Aside from Ben, Brian and Anne the event team included Rosalie McCauley and Sue and Jack Dowling. The team were very grateful for the small band of control collectors – Rob West, Dave Symonds, Brian and Anne Austen, Simon Windsor and Robert Pullela.