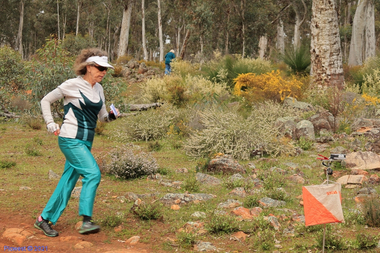 Spring sunshine drew regular orienteers and those looking for a family day out to the southern end of Marginata. Several large family groups enjoyed the E level course that took spectacular advantage of water was actually flowing in the main creek. On the harder courses mainly open running combined with pockets of complex rock made for some interesting loop courses.

While event day went smoothly, there were several challenges and false starts during the setting process. The original area was Calophylla, off Ridley Road, but after armchair setting the team expedition to hang the tapes was aborted as Ridley Road was flooded and badly eroded. Back to the drawing board (aka Purple Pen) and a reset of the courses using the southern end of Marginata which had provided open running three years ago post a fire. Now the higher parts of the Marginata map are very thick and courses in that area would have left competitors searching for controls in head high prickly moses.

The final courses ended up a bit constrained to the long ridge but judging from the feedback everyone enjoyed the open bush and relatively low climbs the area delivered. Plenty of beautiful wildflowers were on the course and several pretty ant orchids were spotted by picnickers at the assembly area.

Thanks to the setting team of Richard Matthews, Nicole Davis, Chas Lane and Philomena Humphries. The organiser was Nicole, Chas and Phil provided the friendly faces at the start and instructors were Jan Fletcher, Mike Howe and Rosemary Kullmann with Moreen Cox providing assistance to get the event underway as punters arrived to park on Yarra Road. Many thanks to Peter Gillion and Edward Plummer for their towing expertise